Portrait of the Hon. William Feilding c.1705; by Michael Dahl. 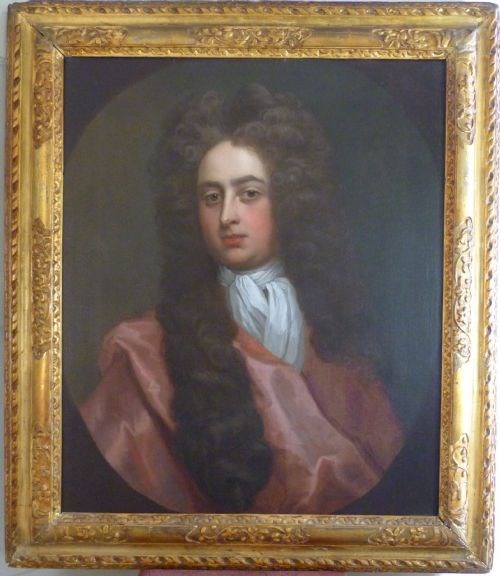 Oil on canvas in fine carved and giltwood period frame.

Feilding, who in 1704 had bought an office with a salary of £500 p.a., made a highly advantageous marriage the following year to a wealthy widow, Lady Diana, daughter of Francis Newport, 1st Earl of Bradford, with a parliamentary seat at her disposal. She had title during her lifetime to the estates of her first husband (with no surviving children to complicate matters) and thereby enjoyed the nomination of one Member at Castle Rising. Feilding obtained the seat in 1705 when a family friend chose to sit elsewhere. It was gossiped before the wedding that ‘this old lady, for she is near fifty if not quite, is fallen in love with this young Feilding, and says she only begs he will be civil to her; she fears he cannot love her, though she does him so much’. Although himself the younger brother of a Tory peer, Feilding was now connected with various Court Whigs among his wife’s kinsmen and her first husband’s friends. He also came into contact with Robert Walpole II, who controlled the other seat at Castle Rising, but this association was not particularly friendly, as the Howard and Walpole interests co-existed in the borough uneasily and in a constant atmosphere of mutual distrust.

In Parliament Feilding was a Whig, with leanings towards the Court. On 18 Feb. 1706 he voted with the ministry over the regency bill. He was marked as a Whig in two lists of 1708. In the same year he resigned his office of lieutenant of the yeomen of the guard. Having supported the naturalization of the Palatines in 1709, the following year he voted for the impeachment of Dr Sacheverell, and on 7 Dec. 1711 he voted for the ‘No Peace without Spain’ motion. He opposed the French commerce bill on 18 June 1713 and voted against the expulsion of Richard Steele on 18 Mar. 1714. In the Worsley list he was classified as a Whig.

Feilding was appointed to the Board of Green Cloth in 1716, most probably through the interest of his wife’s family, the Newports, both at Court and with the clerk of the Green Cloth, their Shropshire ally Sir William Forester. Feilding died at Epsom on 21 Sept. 1723 and was buried at Ashtead. ‘I regret him prodigiously’, wrote his niece, Lady Mary Wortley Montagu, on hearing of his death. His wife outlived him.
{Published in The History of Parliament: the House of Commons 1690-1715, ed. D. Hayton, E. Cruickshanks, S. Handley, 2002. Available from Boydell and Brewer}

IMAGE 6 shows a studio portrait of Feilding, inscribed with his name and further information. We owned and sold this portrait in 2007.

Our thanks to James Mulraine, art dealer and historian, who saved this gentleman from anonymity. www.jamesmulraine.com.

MICHAEL DAHL (1659-1743) was born in Stockholm; after studying in Paris, Rome and Frankfurt he settled in London in 1689. He soon became the best patronised portrait painter in England after Kneller. He was much employed at the Court painting many portraits; a great patron of the 1690s was the Duke of Somerset, for whom he painted the series of portraits of Court ladies known as the 'Petworth Beauties'.

His style is extremely close to Kneller but his interpretation of character is less brash and more human. He has a quieter but somehow more understanding appeal to character which relies on its own integrity to make its impact; his works are of a real distinction.
This painting is typical of Dahl's sensitive portraiture and is of considerable charm.