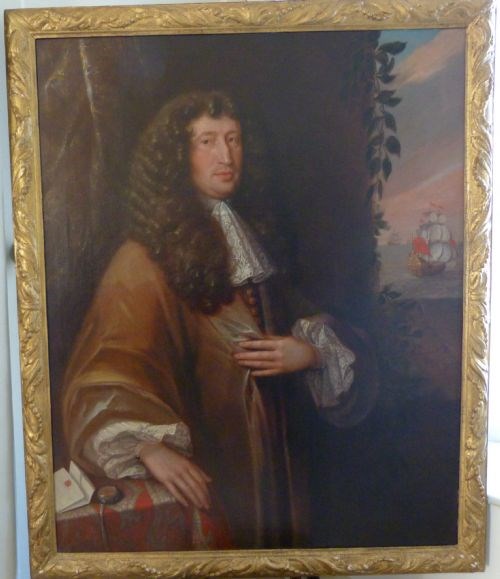 Oil on canvas in carved and giltwood period frame, traditionally said to be JOHN SHUTE BARRINGTON, 1st Viscount Barrington of Ardglass, who was born in 1678 at Theobalds, Hertfordshire, England. He was the son of Benjamin Shute and Elizabeth Caryl. He married Anne Daines, daughter of Sir William Daines, on 23 June 1713 at St. Benet's, Paul's Wharf, London, England.
He died on 14 December 1734 at Becket, Berkshire, England and was buried on 27 December 1734 at Shrivenham, Berkshire, England.(See Image 8 for the memorial).

He was given the name of John Shute at birth and was educated at Utrecht, The Netherlands. He was admitted to the Inner Temple entitled to practice as a Barrister-at-Law and held the office of Commissioner of Customs between 1708 and 1711.
In 1710 he also inherited the estate of Tofts in Little Baddow, Essex, from Francis Barrington, married to his cousin; in the same year he inherited the estate of Becket, and considerable property in Berkshire, from a John Wildman.

Barrington held the office of Member of Parliament (Whig) for Berwick-upon-Tweed between 1715 and 1723. In 1716 his name was legally changed to John Barrington by Act of Parliament. He held the office of Master of the Rolls [Ireland] between 5 July 1717 and 10 December 1731. He was created 1st Viscount Barrington of Ardglass, Co. Down [Ireland] on 1 July 1720 and was created 1st Baron Barrington of Newcastle, Co. Limerick [Ireland] on 1 July 1720. On 15 February 1722/23 he was expelled from Parliament for promoting "an infamous fraudulent project," the lottery of Harbourg....one of the bubble speculations of the time...the punishment was considered too severe and was thought to be due to the personal malice of Robert Walpole, the Prime Minister.
Swift described Barrington as "the shrewdest head in England." However, Horace Walpole wrote "I believe [he] was a very dirty fellow, for besides being expelled from the H. of C. on the affair of the lottery, he was reckoned to have twice sold the dissenters to the Court."...however Walpole was known to intensely dislike Barrington.

His last will was dated 2 March 1726. He lived at Becket, Berkshire, England. He has an extensive biographical entry in the Dictionary of National Biography.

Above information from "The Peerage" which illustrates this portrait in its entry on Viscount Barrington.