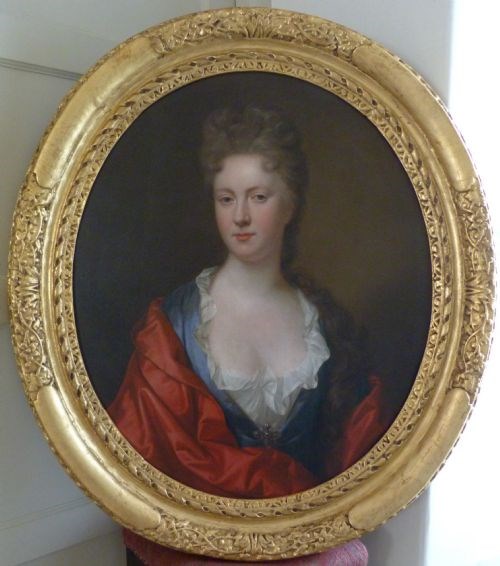 The sitter, fashionably dressed in her daring 'undress', looks confidently at the viewer. This is a good example of the typical society portrait of the period and representative of Murray's best work.
The hand carved and gilded frame is a work of art in its own right.

THOMAS MURRAY (Murrey) 1663 – 1734.
He received his first lessons in art from one of the De Critz family. Subsequently he became a pupil of John Riley.
His works of before 1700 are more independent of the style of Sir Godfrey Kneller than his later portraits
Murray was successful financially. He died in June 1734, leaving no children, and bequeathed his money to a nephew, with instructions that his monument, with a bust, should be erected in Westminster Abbey, provided that it did not cost too much. His nephew, however, taking him at his word, buried him in St. Paul's, Covent Garden, and found the monument too expensive to erect.

SIZE: 37 x 33 inches inc. frame.
PROVENANCE: Collection of a Family of Title, Yorkshire Dales.
(The same collection as the portrait of Francis Russell on this website, also the portrait of Henrietta Maria).
Verso: two old inventory labels '53' and '118' plus 19th c. inscription 'No.19'.