Portrait of a Lady c.1635; Attributed to George Jamesone. 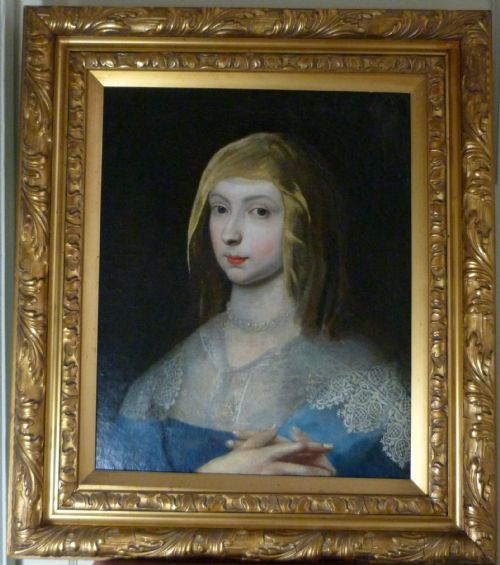 Oil on canvas in a 19th century gilt frame.

The attractive sitter's hands are elegantly posed in front of her heart as she looks directly at the viewer.
She wears a low cut bodice which was extremely fashionable but the wearer could choose, as has this lady, to preserve her modesty by wearing a diaphanous piece of fabric over the decolletage. Partly covered by this material is the fine quality expensive 'reticella' lace. Also known as 'cutwork' this is the period when it was at its most sophisticated and technically skilled.

Her modesty is further emphasised by the fact that she covers her hair (as does Jamesone's wife in his portrait showing himself, wife and child).


GEORGE JAMESONE (or Jameson) (c. 1587 – 1644) was Scotland's first eminent portrait-painter.
He was born in Aberdeen, where his father, Andrew Jamesone, was a stonemason. Jamesone attended the grammar school near his home on Schoolhill and is thought to have gone on to further education at Marischal College.
Legend has it that Jamesone once studied under Rubens in Antwerp with Anthony van Dyck. This is, however, yet to be proven as his name does not appear to be noted on the Guild registers of the town. Since Rubens was exempt from registering pupils, the absence of Jamesone's name does not mean that the painter definitely did not study there.
Certainly Jamesone's style is influenced by Rubens, and usually painted thinly, with great style.

Jamesone certainly did complete an apprenticeship under the supervision of his uncle, John Anderson, who was a popular decorative painter in Edinburgh at the beginning of the seventeenth century. Jamesone finished this training in 1618. He is not recorded as being in Aberdeen again until 1620. If the Scotsman had gone to Antwerp, it would have had to have been between the years of 1618 to 1620.

Whilst in Aberdeen, Jamesone made a name for himself painting portraits of local academics and scholars from the city's two feuding colleges: King's and Marischal. In 1633, when Charles I made his grand royal visit to Edinburgh, Jamesone rose from local to national fame. For this occasion the painter was asked to decorate a highly elaborate triumphal arch with the portraits of all the past kings of Scotland. He was also given the honour of painting the portrait of Charles himself. It has been said that the king was so pleased with the result that he gave Jamesone a ring off his own finger as a reward.

After hearing of the King's approval, many of the Scottish gentry desired to be painted by the now highly reputable George Jamesone. One of his finest examples is that of Mary Erskine which is on display at the National Gallery of Scotland. Jamesone had homes and studios in Aberdeen (on Schoolhill opposite St. Nicholas Kirk) and in Edinburgh (on the Royal Mile right next door to John Knox House). Having two bases allowed him to meet the demands of hundreds of patrons from the north to the south of the country.