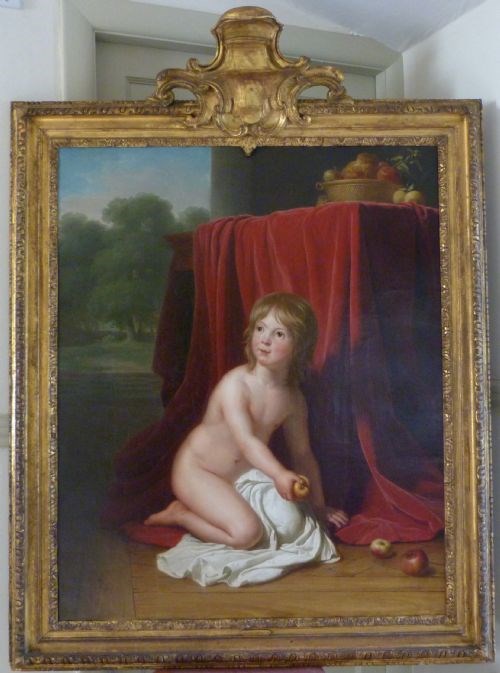 Oil on canvas in an imposing period giltwood frame.

An enchanting portrait of a child holding an apple by a draped table with apples and bread in a basket, a park landscape beyond.

The nudity of the sitter is intended to convey a sense of the innocence and lack of affectation in childhood.
The gender of the sitter is uncertain...the hair style being rather more that for a boy than a girl but, perhaps significantly, the child plays with apples and a basket of them is on the table. Apples are the attributes of the beautiful Three Graces, handmaidens of Venus.
The portrait is signed and dated "A mon cher/ ..eyen..n.. Elisabeth/ 1797". Whether the use of the masculine 'mon cher' refers to the painting being dedicated to the (male) sitter or to a male recipient is not known, but clearly it was someone towards whom Elisabeth Chaudet felt affection.
The Chaudets were married in 1793 so there is a possibility that this was their child, aged four in 1797.

The portrait has a natural informal feel...a snapshot of a fleeting moment, but the artist carefully, and exquisitely, depicts the opulent velvet on the table and the cultured parkland of a great estate; the point is made...this is a child of a wealthy and powerful family.

The frame bears an old label incorrectly naming the artist as Elisabeth Vigee-LeBrun.

JEANNE-ELISABETH CHAUDET née Gabiou (b Paris, 23 Jan 1767; d Paris, 18 April 1832) was an important Empire painter who began her career as a pupil of the renowned 18th Century portrait painter Elisabeth Vigée-Le Brun. She was the wife of Antoine-Denis Chaudet, the celebrated sculptor. She exhibited in the Salon between 1798 and 1817. From the beginning she enjoyed the approval of the public and the critics. The Little Girl Trying to Teach her Dog to Read (exh. Salon, 1799; Rochefort, Mus. Mun.) made her famous.
The Empress Josephine bought Young Girl Feeding Chicks (exh. Salon, 1802; Arenenberg, Napoleonmus.) for the gallery at Malmaison. Chaudet increasingly produced genre scenes incorporating young girls, children and pets, such as Child Sleeping in a Cradle Watched by a Good Dog (exh. Salon, 1801; Rochefort, Mus. Mun.) and Young Girl Crying over her Dead Pigeon (exh. Salon, 1808; Arras, Mus. B.-A.).
She is best known as a genre painter but also produced a large number of portraits, such as the full-length portrait of a Young Child in a Lancer's Costume (c. 1808; Arras, Mus. B.-A.).
Chaudet obtained a Prix d'Encouragement at the Salon of 1812 for the Little Girl Eating Cherries (Paris, Mus. Marmottan), but after 1812 her popularity declined. Her second husband, Pierre-Arsene-Denis Husson, whom she married in 1812, left an important collection of her work to the Musee des Beaux-Arts in the Abbaye St-Vaast, Arras.