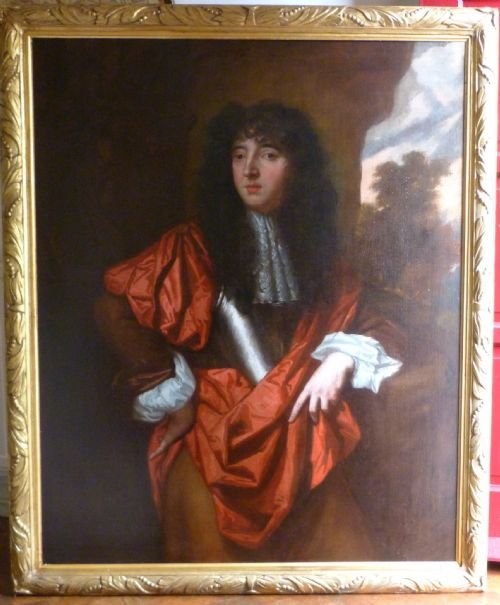 The sitter, thought to be the Earl of Derby, is painted in a typical Lely pose; Lely painted the notorious John Wilmot, Earl oF Rochester in this very attitude.
It is likely that this portrait was commissioned in 1672 to mark William's succession to the earldom, or his marriage to Lady Elizabeth Butler the following year.
The breastplate does not signify any martial activity by the sitter, it was there to symbolise aristocratic power and wealth. The sitter wears a fashionable and costly wig and an even more expensive cravat of Venetian 'gros-point' lace. In 1685 Charles II ordered three cravats of such lace at a total cost of £94....equivalent to over £16000 today!

William was the eldest son of Charles Stanley, 8th Earl of Derby, and Dorotha Helena Kirkhoven. He succeeded his father in the earldom in 1672 at the age of 18.
He was commissioned to the lieutenancies of Lancashire, Cheshire, and five Welsh counties, but although possessing good education and an intelligent mind, he declined to take part in the great affairs of State, and lived the life of a quiet country gentleman.

JOSEPH BUCKSHORN (Bokshoorn, Boxhorn), c.1645 - c.1680, was a portraitist who was said to have been born in The Hague and came to England c.1670. He acted as a drapery painter for Lely. (Sir Peter Lely was the dominant Court painter of this period and maintained a large studio with talented assistants to supply the demand for his portraits).
Buckshorn's only known portraits are Lely patterns, and his style is very much that of his master.