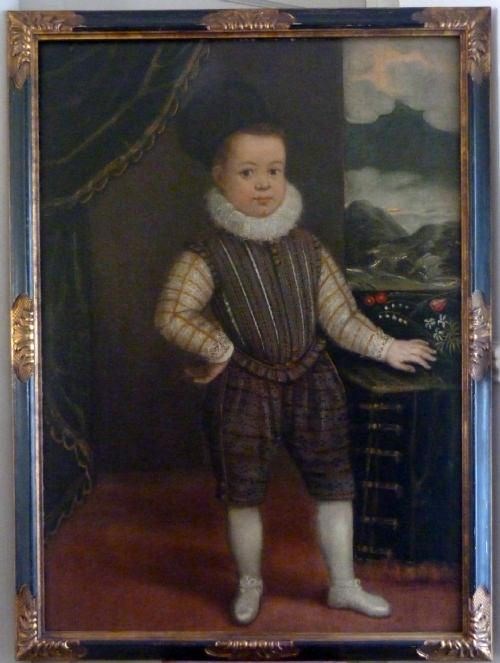 Oil on canvas in a parcel gilt and ebonised frame.

This charming naive portrait depicts a boy, almost certainly of aristocratic birth, wearing extremely expensive clothing.
Painted c.1620, this is probably Northern Italian, rather mannered and stiff, it is clearly the work of a provincial artist of only moderate talent; yet the slightly primitive feel, the lack of assurance in perspective and proportion, give this endearing image an intimacy and directness sometimes lacking in the more accomplished portraiture of the period.

Probably painted when he was five or six, as this was the age at which a boy stopped wearing skirts and adopted the clothing of a man.
The boy rests his left hand on a lavishly clothed table and looks assuredly at the viewer.

On the window ledge are two cherries which symbolise youth; the cherry was also known as the Fruit of Paradise, given as a reward for virtue, it also symbolises Heaven.
Amongst the flowers can be seen white jasmine which represents amiability of character.