Double Portrait of a Lady and Gentleman c.1740; Attributed to Francis Hayman R.A. 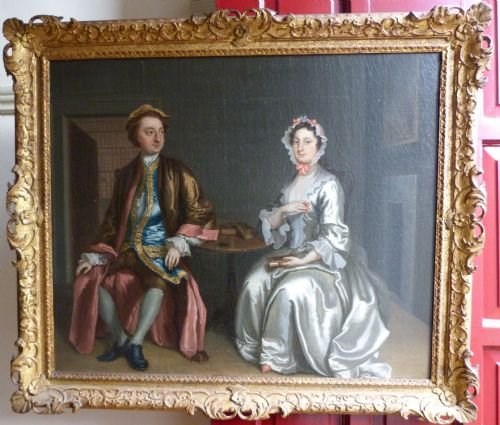 Oil on canvas mounted on board in fine period carved and giltwood frame.

This type of small scale portrait is known as a conversation piece and .."was the first real break with the stereotyped portraiture of the early 18th century. It was essentially a private rather than a public art form.
The aim of the coversation piece was to catch the sitter with family and friends in action, and Hogarth, a friend of Hayman's, succeeded extremely well at this." (Francis Hayman by Brian Allen).
Hogarth was a positive influence on Hayman as he had demonstrated that there was a good market for the small scale conversation piece.

In this portrait the male sitter has discarded his wig and wears a velvet cap of the type associated with artists, writers and other creative people. He also wears an expensive silk 'tea gown' to emphasise his relaxation at home. It is clear that the world of literature is being emphasised...a door opens onto a library, more books are on the table and the lady holds a volume with her finger marking her place.

The middle class panelled room is typical of Hayman and occurs many times in his conversation pieces and are, more often than not, a version of his own panelled studio.

FRANCIS HAYMAN R.A. (c.1708-1776) was born in Devon and painted scenery as well as genre, historical subjects and portraits. He had a successful career producing conversation pieces, theartical portraits and small full lengths through the 1740s and 50s, although he also painted on the scale of life. He helped in the foundation of the Society of Artists in 1760 and was President 1766-68; after which he became a Foundation Member of the Royal Academy, and its Librarian in 1771.
Among the pupils in his studio were Thomas Gainsborough R.A. and Nathaniel Dance R.A.

SIZE: 30 x 35 inches inc. frame.
PROVENANCE: Verso, handwritten label "Property of Major J.M.D. Wyatt, Roberstbridge House, Robertsbridge, Sussex"
The late major was the last member of the family which had connections with the D'Obrees in Guernsey.