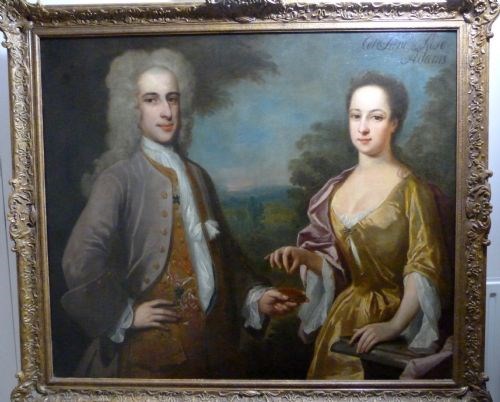 A pleasing double portrait of Colonel Samuel Adams and his wife Rose, to whom he offers his snuff box for her to take a pinch. This is most unusual in portraiture.


(Snuff is a product made from ground or pulverised tobacco leaves. It originated in the Americas and was in common use in Europe by the 17th century.
It was generally inhaled or "snuffed" through the nose, usually directly from the fingers.
By the 18th century, snuff had become the tobacco product of choice among the upper classes, both male and female. The taking of snuff helped to distinguish the elite members of society from the common populace, which generally smoked its tobacco.)

The Adams were an Irish family, they had emigrated to Ulster from Scotland in the 17th century. Colonel James Adams, who settled in County Down in the mid 17th century had been an officer in the Parliamentary Army.
The sitter, Colonel Samuel Adams, was the son of Samuel Adams and Sarah Burbank.

Jervas gave painting lessons to Pope at his house in Cleveland Court, St James's, which Pope mentions in his poem, To Belinda on the Rape of the Lock, written 1713, published 1717 in 'Poems on Several Occasions'.
With his growing reputation, Jervas succeeded Kneller as Principal Portrait Painter to King George I in 1723, and continued to live in London until his death in 1739, although he made made lengthy visits to Ireland.