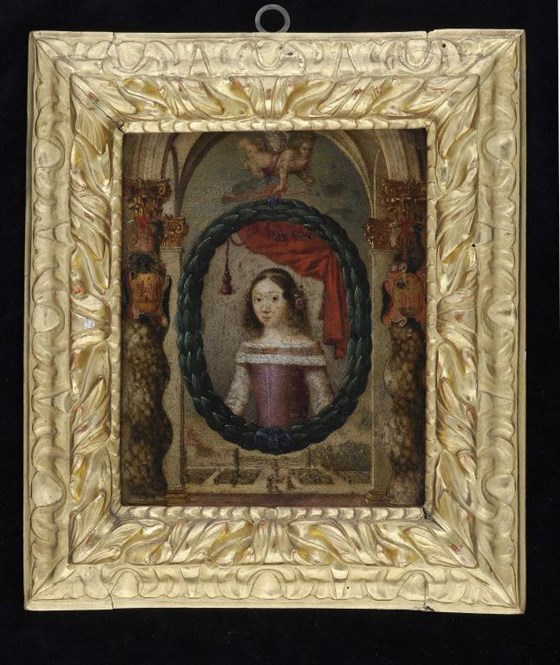 Oil on copper in carved and giltwood Baroque frame.
This small, rare and charming portrait of an aristocratic girl is painted on a copper plate, the verso of which is beautifully engraved with an armorial device; probably that of a Spanish Marquesa.
The sitter, surrounded by laurels, is depicted between Solomonic columns, a highly fashionable baroque motif of the period.
The coats of arms on the columns appear to be those of Spanish royalty, possibly of Castile.
Of cabinet size the painting has a great theatrical sense and, in its rich frame, an intensely jewel-like quality. (The 'cabinet' in the 17th century was a small, intimate room in which were kept items important to the owner,and only their closest friends and family would be admitted).
SIZE: 13 x 11.5 inches inc. frame.
PROVENANCE: Flaxley Abbey, Gloucestershire. (see image 5).
The Crawley-Boevey baronets had Flaxley Abbey, Gloucestershire as their seat from 1642 to 1960 when it was bought by the Baden-Watkins family along with much of the contents. This latter family later sold their acquisitions, including this portrait, in March 2015.
The Crawley-Boevey baronets are descendants o Ferdinand I of Leon and Castile and Alphonso I of Portugal. This may explain the presence of this portrait on the Flaxley Collection.