Portrait of a Boy of the Crawley-Boevey Family of Flaxley Abbey (?) c.1780; English School. 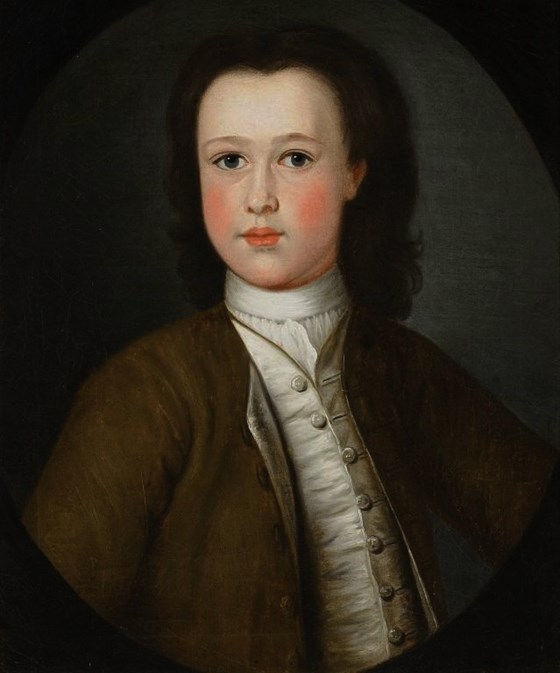 Oil on canvas in a giltwood frame.
A charming portrait of a young boy likely to be a member of the Crawley-Boevey family, late 18th century, painted within the feigned oval that was so fashionable at the time.
It is possible that the sitter is Sir Thomas Crawley-Boevey, 3rd Bt., born on 28 November 1769. He was the son of Sir Thomas Crawley-Boevey, 2nd Bt. and Ann Savage. He was baptised on 1 December 1769 at Flaxley Abbey.
He married Mary Albinia Page, daughter of Sir Thomas Hyde Page and Mary Albinia Woodward, on 28 October 1807. He died on 10 January 1847 at age 77 at Flaxley Abbey and was buried there.
The artist is unknown and was probably one of the many provincial portraitists of the 18th century with influences by Kneller, Jervas, Richardson and other top artists; this mixture became a no nonsense, direct style of portraiture typical of the English School.
SIZE: 22 x 19 inches.
PROVENANCE:Collection of the Crawley-Boevey baronets who had Flaxley Abbey, Gloucestershire (see Image 8) as their seat since 1642.
Sold by direction of Sir Lance V.H. Crawley-Boevey (1900-1968) by Bruton, Knowles and Co. at the Six Day Sale of the Contents of Flaxley Abbey. Bought by F. Baden Watkins the new owner of Flaxley.
Lined and restored for Flaxley Abbey Estate Ltd by Frost & Reed Ltd. c. 1965.
Between 1962 and 1963 Flaxley Abbey's interior was restored by Tony Award winning theatre and set designer Oliver Messel.
Philip Baden-Watkins sold much of the Flaxley collection, including this portrait, in March 2015.