Portrait of a Lady in White 1906 by Margaret Kemplay Snowden . 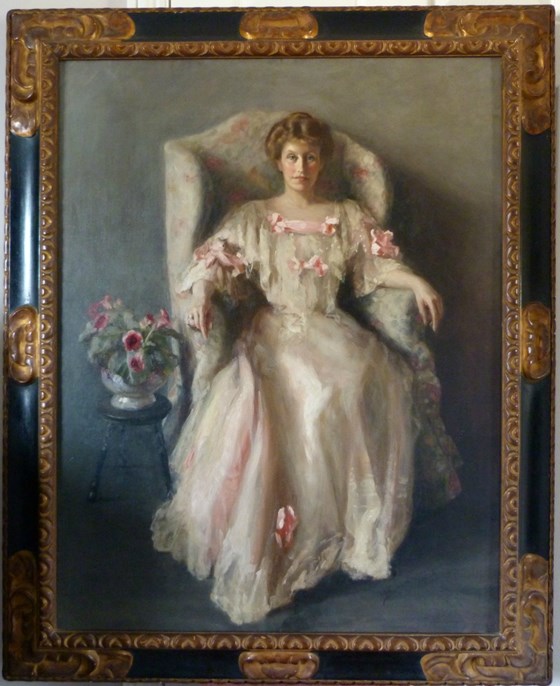 : Oil on canvas in a part gilt frame.
Singed and dated 1906 lower right.
A striking Edwardian portrait of a lady of the early 1900s sitting relaxed in a wing chair.
The treatment of the material is done in a very free manner with a real painterly enjoyment in the use of the medium.
MARGARET KEMPLAY SNOWDEN was born in Leeds, Yorkshire in 1878, (died 1965), the Kemplays and the Snowdens being old, prosperous Yorkshire families. Her parents were Richard Kempley Snowdon, MA Oxon (Clergy), Head Curate of St Johns, Leeds, and Mary Louisa Milnes-Wright, born Collingham, Notts.
Called Margery by the family Margaret exhibited from 1918 to 1938.
Painted in 1906 when Margaret was 28, and 12 years before she started exhibiting, it is likely that the sitter in this portrait was a member of the Kemplay Snowden family, perhaps one of her sisters - Lilla Mary or Ethel Cooper.
In 1881 Margaret lived with her family at 10 Grove Terrace, Leeds - moving to Ledsham Vicarage by 1891 and Harrogate by 1901. Her father had died in 1896 and Margaret and her three sisters were unmarried. Mary Louisa remarried Fairfax Rhodes in 1916.
The London Gazette of 2 Jul 1965 has an entry for Margaret's death for 28 Apr 1965. She was living at Thornecliffe, Lansdown Road, Cheltenham and is described as "Spinster". There is also a BMD record of her death as Margaret K SNOWDON in 1965 in Cheltenham.
SIZE:43 x 35 inches inc. frame.
PROVENANCE: Christie's sale 1996.
Private Collection, London.