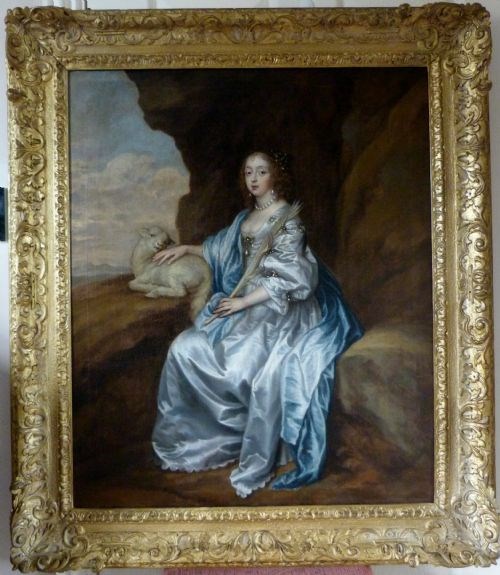 The original portrait by Sir Anthony van Dyck is life size and in the Royal Collection. "A number of copies of this portrait survive, some indicating that the original version was once larger in size." quote from'Van Dyck in Britain', edited by Karen Sharpe, published by the Tate.
This is one of those, and the sitter fits within the composition much more comfortably than the now tightly cropped original.

The original painting, in the Royal Collection, Windsor, was presumably painted for Charles I, who gave the sitter away at her wedding in 1637 to the Duke of Lennox. She is shown as St Agnes, the patroness of those engaged to be married.
St Agnes is usually accompanied by a lamb, because of the similarity of her name to the Latin agnus, a lamb, but actually ‘Agnes’ comes from the Greek word for ‘chaste’. It has been pointed out, by the late Sir Oliver Millar, that she looks older than the fifteen years old that she would have been in the year of her marriage, and that the cool tonality is more typical of Van Dyck’s later work.

Lady Mary Villiers was the daughter of 1st Duke of Buckingham and Katherine Manners and, raised with the royal children, she was a favourite of James I and Charles I. She was married three times.
In 1626 she was betrothed to Charles Herbert, son of Philip, who subsequently succeeded as 4th Earl of Pembroke. They were married on 8 January 1635, but Herbert died a year later, leaving a 13 year-old widow. Her second marriage was to James Stuart, Duke of Lennox (afterwards Duke of Richmond), a cousin of Charles I, on 3 August 1637. Whilst living at King Charles I exiled court at Oxford between 1643 and 1645, Mary was rumoured to have had an affair with Prince Rupert of the Rhine.
The Duke of Richmond died in 1655, and Mary left for the exiled Royalist community in Paris. After the Restoration she returned to the English Court and became Lady of the Bedchamber to the dowager Queen, Henrietta Maria. In 1664 she was married to Colonel Thomas Howard (d. 1678), brother of 1st Earl of Carlisle.

As Duchess of Richmond, and later as the wife of Colonel Howard, Lady Mary was a prominent figure at Court after the Restoration. Several poems by the anonymous Stuart poetess known as Ephelia (whose works were published in 1679 as ''Female Poems... by Ephelia'') were dedicated to her, and it has been established in the last decade by Maureen Mulvihill of the Princeton Research Forum that Ephelia was in fact Lady Mary herself. This poetess produced an intriguing set of texts, some privately-printed, being bold political broadsheets against the Popish Plot and the rising of James, Duke of Monmouth, as well as amusing coterie verse, songs, a collection of female poems, amorous verse-letters, and ‘a damn'd play’, evidently a farce-burlesque on the debauched private lives of Charles II and his brother, James, Duke of York. This new identification suggests that Lady Mary Villiers was the most highly-placed, publishing woman writer of the Stuart period.
She died in 1685 and was buried in Westminster Abbey.

SIR ANTHONY VAN DYKE (1599-1641) was the greatest master of the European baroque portrait. Born in Antwerp, he first visited England in 1620. In 1632 he entered the service of King Charles I as Court Painter, and was knighted in 1633.
His clientele was essentially the aristocratic circle of courtiers, many of whom lived in a romantic Royalist dream world which collapsed in ruins in the Civil War, soon after Van Dyck's death.
Van Dyke's influence on the art of the portrait is almost beyond measure.