Portrait of Charles I c.1640; Attributed to Remigius van Leemput. 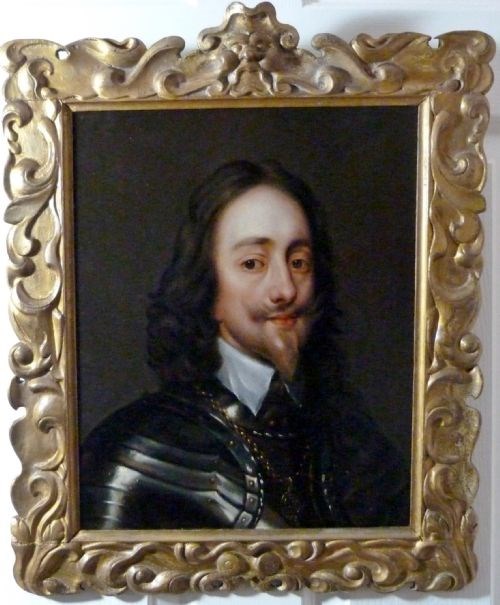 Oil on oak panel in a rare and fine period carved auricular frame.
(The auricular style flowered in the 1640s and 1650s, and subsequently in the form of the Sunderland frame. Auricular, meaning literally 'of the ear', was a highly stylised free-flowing interpretation of organic forms, usually animal or marine in nature and was fashionable from the 1630s to the 1680s for pictures of all sizes).

One of the series of portraits after Van Dyck and Lely. By the reign of George III they were attributed to Theodore Russell (1624-88), nephew of Cornelius Johnson, but on stylistic grounds and format they are now attributed to Remigius van Leemput, believed to have been at one time an assistant in Van Dyck's studio. (see The Royal Collection).

This portrait is an excellent version of one of Van Dyck’s finest portraits of Charles I. The original, a full length, was painted c. 1638, and shows Charles in full armour, holding a commander’s baton, his hand resting on a sword, with a crown and helmet in the background. The best version is in the Hermitage in St Petersburg. The portrait became one of the most popular of Charles, especially during and after the Civil War, as Royalists sought images of the king as a military hero.
Difficult to date precisely, these reduced copies of van Dyck's works were produced around the middle of the 17th century, particularly during the time of the English Civil War and the King's execution in 1649. They were much in demand as 'cabinet' pictures, adorning the private walls of Royalist supporters. (The 'cabinet' in the 17th century was a small, intimate room in which were kept items important to the owner,and only their closest friends would be admitted).


REMIGIUS VAN LEEMPUT,(1609?–1675), painter, born at Antwerp about 1609, was received into the Guild of St. Luke there in 1628–9. He came to England in Charles I's reign, and among other works for that king he made a small copy in oils of the famous painting by Holbein at Whitehall of Henry VII, Henry VIII, and their queens, which was afterwards destroyed by fire; Van Leemput's copy is now at Hampton Court. He was one of the purchasers at the sale of King Charles's collection, and among his purchases was the great picture of Charles I on horseback, by Van Dyck (now at Windsor), which was recovered from him with some difficulty at the Restoration. M. Remy or Remée, as he was usually called by his contemporaries, was a well-known and skilful copyist of pictures. He copied many portraits by Van Dyck, and told Sir Peter Lely that he could copy his portraits better than Lely could himself. Van Leemput died in 1675, and on 9 Nov. was buried in St. Paul's, Covent Garden.