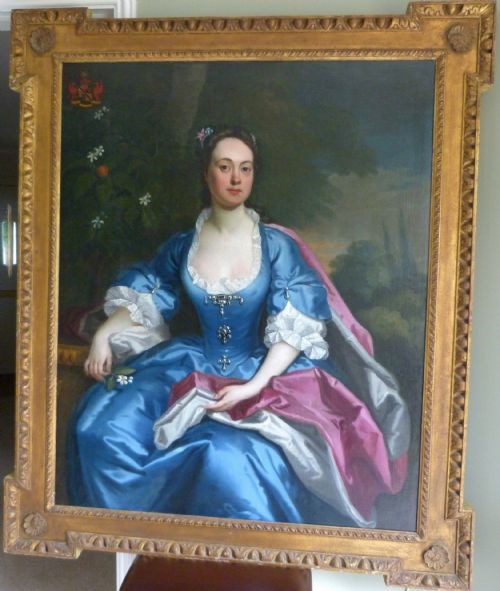 Oil on canvas in a good 18th century William Kent frame.
The Duchess sits beside an orange tree and holds one of its flowers.
Oranges were an expensive luxury in Northern Europe, coming as they did from the warm South. They also has considerable symbolic significance.
The orange tree bears leaves, flowers and fruit all at the same time. The leaves, which are evergreen, are the symbol of eternal love, the white flowers represent purity and generosity of spirit and the fruit represents hope for the future of a family or dynasty.
In the upper left of the portrait is depicted the coat of arms for the Spencer-Churchill family.

Charles inherited the Sunderland title from his older brother in 1729, becoming 5th Earl of Sunderland, and then the Marlborough title from his aunt, Henrietta, 2nd Duchess of Marlborough in 1733.
He was one of the original governors of London's Foundling Hospital, the foundation of which in 1739 marked a watershed in British child care advocacy and attitudes.

MARIA VERELST (1680-1744)was arguably the greatest female immigrant artist of the late Stuart/early Georgian era, she was the daughter of Dutch painter Herman Verelst (1641-1690) and niece of the more well-known Stuart court painter Simon Verelst (1644-1710). Maria moved to England at the age of three with her father following the siege of Vienna by the Ottoman Empire and, following her father’s success, later became his student. Well-connected and highly skilled, Maria established herself quickly and her earliest recorded painting dates to c. 1695, painted when Maria was fourteen, and depicts William Wentworth, 2nd Earl of Strafford (1626-1695) [Welbeck Abbey]. Maria painted several works for Welbeck as well as thirteen portraits for James Brydges, 1st Duke of Chandos.
In addition to being a talented painter, Maria was also well educated and spoke a number of different languages which no doubt helped her secure patronage.