Portrait of a Girl in Red c.1710; Follower of Kneller. 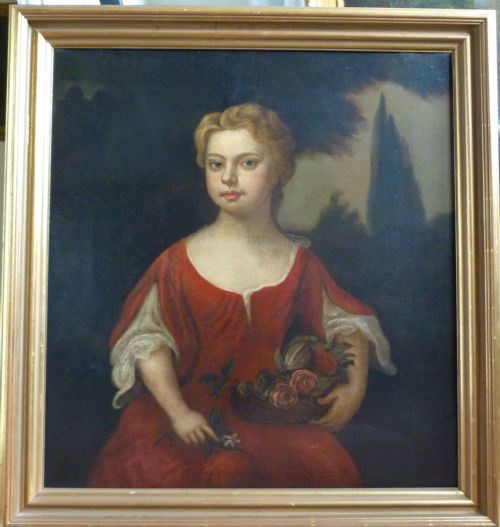 Oil on canvas in a giltwood frame.

Sitting in a garden, the girl holds a basket of flowers..mainly roses, which symbolise love and affection. She also holds jasmine of which the attributes are amiability of character, wealth, grace and elegance.
When held in the lap by a woman flowers often signified future fruitfulness and a warning that time passes quickly...like flowers, youth and beauty fade rapidly.

SIR GODFREY KNELLER (1646-1723) was the most distinguished painter of baroque portraits in England.
Born in Lubeck, he trained with Bol and Rembrandt, coming to London in 1676.
By 1679 he had painted the King and remained the most famous and successful portrait painter in England until his death.
In 1688 he was made Principal Painter to the King and was knighted in 1692 and a made a baronet in 1715.
His style had a profound influence on British portraiture and a large number of artists, many very talented in their own right, emulated his fashionable style.
SIZE: 32 x 31.75 inches.
PROVENANCE: Essex Private Collection.
Verso: Old label for Hanover Concessionaires, Fine Art Dealers of Hanover House, Cheltenham.