Portrait of a Young Boy and his Dog c.1775; English School. 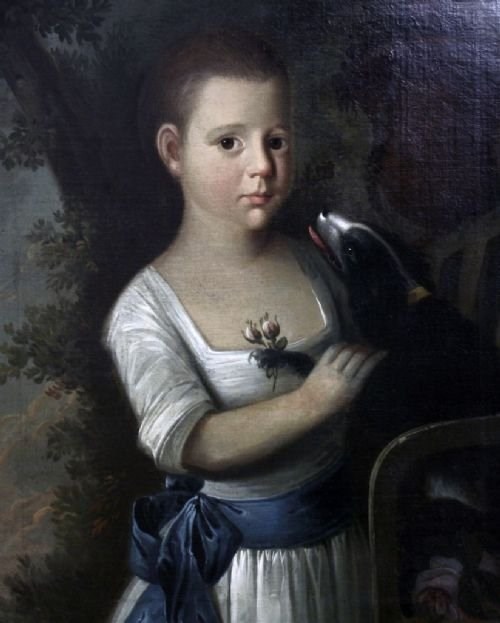 A pleasing Georgian portrait of a young boy still 'unbreeched'.
Breeching was the occasion when a small boy was first dressed in breeches or trousers. From the mid-16th century until the late 19th or early 20th century, young boys in the Western world were unbreeched and wore gowns or dresses until the age of seven or eight. Breeching was an important rite of passage in the life of a boy, looked forward to with much excitement. It often marked the point at which the father became more involved with the raising of a boy.

The signs that the sitter is a boy and not a girl are the short hair and the dog being active rather than docile by the side of the sitter.
The rose buds are a symbol for youth and its fleeting nature and the dog, although probably a pet, also represents fidelity and trustworthiness.

The artist is at yet not known, but he seems to have been influenced by the work of Thomas Beach (1738-1806) who was the favourite pupil of Sir Joshua Reynolds. Beach was based in Bath but travelled round Dorset and Somerset painting portraits.