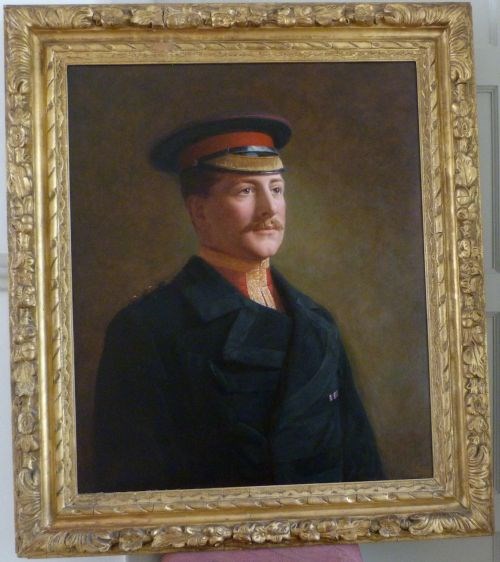 A fine quality portrait in superb condition having been within the family all its life. Unlined and having been under glass since painted it has never needed restoration or even a clean. The frame, which has one or two slight damages, is original.

Viscount Ingestre held the rank of captain in the Royal Horse Guards and was invested as a Member of the Royal Victorian Order.
(This is a dynastic order of knighthood recognising distinguished personal service to the reigning monarch, any members of their family, or any of their viceroys. It was established in 1896.)

Among other properties the family owned Ingestre Hall and Alton Towers, the latter was where the sitter was born and was to have been lived in by him and his family, indeed, his parents gave him the name Alton; however, it was not to be.
He died on 8 January 1915 at age 32 of influenza which turned to pneumonia.

FREDERIC REMBRANDT HARDY, known as DOROFIELD (1853–1937) was a member of an extensive family of artists.
He was very successful in his day, working from 1882 to 1920, and exhibiting frequently at the Royal Academy, the Royal Institute and others.
He painted many society portraits, landscapes and interiors. He was also in demand as a copyist of Old Masters, so much so that this then became his main occupation and over the years he seems to have been largely forgotten as a talented portraitist in his own right.