Portrait of a Gentleman 1666, Attributed to Samuel van Hoogstraten. 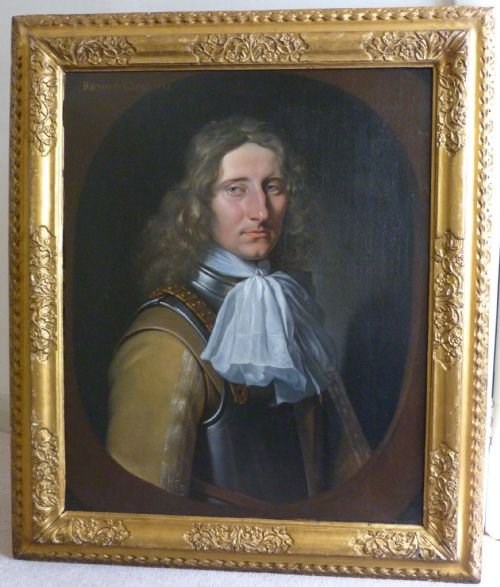 Oil on canvas; a superb quality portrait in a good 17th century carved and giltwood frame.

This powerful portrait has been known as Richard Cromwell, Oliver's third son, for many years, but, although the sitter bears a resemblance to the second Lord Protector, it is a doubtful attribution.

Looking directly and frankly at the viewer the sitter, almost certainly a military officer, makes no concession to any of the more foppish fashions of the day. He wears his own hair, not a wig, his cravat is simple. His sleeves have a silver thread pattern and over all he wears a breastplate with a buff leather coat beneath.
Although plain, all these items are of good quality...indeed, the young man must have been wealthy in order to commission such a high quality (and therefore expensive) portrait.
The different textures and appearance of all these materials, and the flesh and hair, are exquisitely painted by Hoogstraten.

Upper left, probably added in the 18th or 19th century, is the later inscription 'RICHARD CROMWELL', and to the middle right is another very faint inscription which seems to be contemporary with the portrait 'Aet. 23. Ano. 1666'.
If this date and the sitter's age are correct then it cannot be Cromwell who was born in 1626.

SAMUEL VAN HOOGSTRATEN (1627 - 1678)
Samuel van Hoogstraten was born in Dordrecht on 2 August 1627. He was first the pupil of his father, then, some time after his father's death in 1640, he entered Rembrandt's studio.
He painted genre scenes and portraits and he is well known as a specialist in perspective effects.
Hoogstraten travelled widely, visiting Rome and Vienna, where he was patronized by the Emperor. He was in London from 1662 to 1666, the time of the Great Fire.
He finally settled in his native town where he was made a Provost of the Mint. He published a book in 1678 "lnleyding tot de Hooge Schoole der Schilderkonst" (An Introduction to the Art of Painting), one of the few handbooks on painting published in Holland in that century. He died in Dordrecht on 19 October 1678.