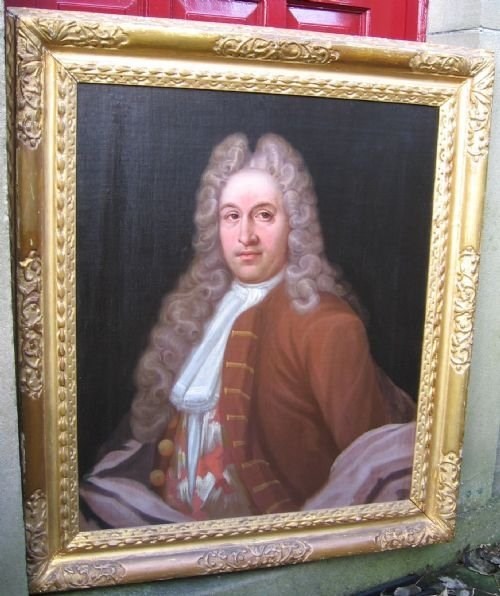 Oil on canvas in good quality period frame (damaged on the reverse of the right hand bottom corner, but barely visible from the front).

This fine quality portrait may be of Gervais Nevile, born c.1676 at Wellingore Hall, Kesteven, Lincolnshire. His parents were Bryan Nevile (1640 - 1754) and Martha Ellis (1652 - 1710).
His first marriage was in the 1690s and he married for a second time in June 1711 and his wife, Honora, bore him nine children, of whom only three survived. Honora was the daughter of Dr. John Richards MD of Chelsea (1655-1697/8).
(Our thanks to Christopher Richards for the bigraphical information).

The Neviles of Aubourn Hall and Wellingore Hall, are an ancient Lincolnshire family, who descend in the male line from Gilbert de Nevile, mentioned in the Doomsday Book and an ancestor of the Nevills, Earls of Westmoreland.

JONATHAN RICHARDSON Snr (c1665 - 1745 was the leading native-born portrait painter of the first forty years of the century. He and Jervas were in rivalry with Kneller and Dahl. Jervas excelled with women's portraits Richardson was best with men. His works were sound, solid, good likenesses, and unpretentious.

PROVENANCE:
By descent through the Nevile family of Aubourn and Wellingore.
Verso: old handwritten label "Living Room. No. 4"