Portrait of a Young Man in Red c.1720: Attributed to Hans Hysing 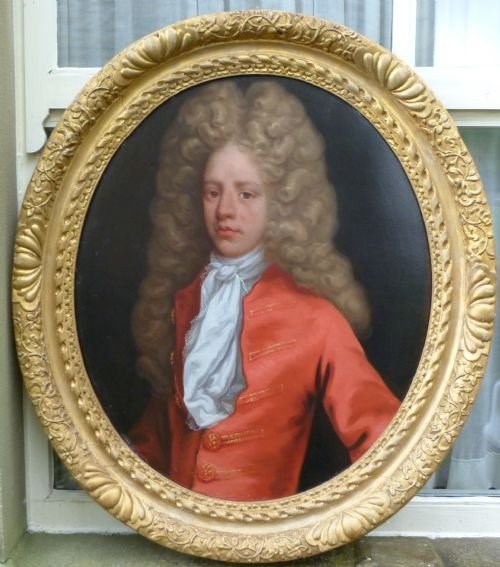 Oil on canvas in a fine carved and giltwood period frame.

A good quality portrait absolutely typical of its time; the sitter wears a fashionably large and expensive wig. (The expression 'bigwig' for a rich or important person comes from this fashion).

HANS HYSING or Huyssing (1678-1752/1753), born at Stockholm in Sweden. He came to England in 1700 as assistant to his fellow Swede Michael Dahl, the portrait-painter, with whom he lived for many years.
He succeeded after Dahl's death to his practice, and adopted his manner. He was patronised by the family of George II, and painted the queen, the three royal princesses, and George III as a boy.
Many of his portraits, including Sir Robert Walpole, the speaker Arthur Onslow, Dr. John Theophilus Desaguliers, James Gibbs (the architect), were engraved in mezzotint by John Faber (1695-1756), and others. George Vertue describes portraits by him of the French engraver Joseph Goupy as 'well painted, much in Mr. Dahl's later manner.'