Pair of portraits of William and Sarah Yorke c.1680; Circle of John Riley. 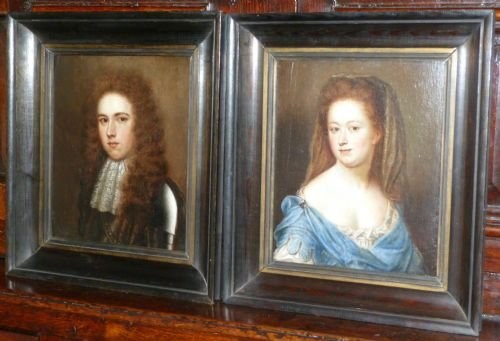 A pair of oils on oak panels of small size, late 17th century, probably painted to mark the marriage of the Yorkes. These charming portraits are unpretentious and have a good sense of the character of the sitters.
There are several Yorke families in the country, including that of the Earls of Hardwicke; as yet it is not knwn which Yorke family is represented here.

JOHN RILEY, or Ryley, (1646– 1691) was an English portrait painter. He painted portraits of Charles II and James II, and was court painter to William III and Mary II. One of his pupils was Jonathan Richardson.
Riley was born in London, one of the sons of William Riley or Ryley, Lancaster herald and keeper of the records in the Tower of London; another son, Thomas, was an actor.

Riley studied painting under Isaac Fuller and Gerard Soest, and from the latter learnt a forcible, straightforward style of portraiture which rendered his portraits noteworthy. Riley did not attain much eminence until the death of Sir Peter Lely, when courtier and royal official Thomas Chiffinch sat for him, and was so much pleased with his portrait that he showed it to the king.

Charles II gave Riley some commissions, and eventually himself sat for him. Riley also painted James II and his queen, and, on the accession of William and Mary, he was appointed court painter.

Riley was said to be a quiet, modest man, very diffident of his own art, but his portraits are truthful and lifelike. With more self-confidence he might have attained to the position of Lely or Kneller.
Among Riley's pupils was Jonathan Richardson (1665–1745), who married a niece of Riley.