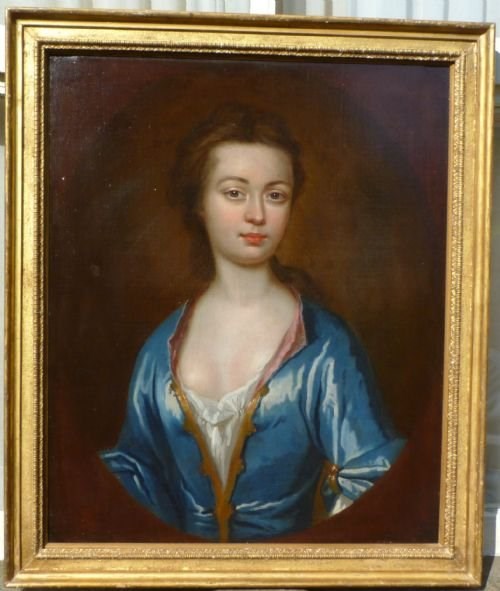 Oil on canvas in gilded frame.
Portrait possibly of DOROTHY, VISCOUNTESS TOWNSHEND (1686-1739).
Dorothy was the sister if Sir Robert Walpole, England's first prime minister who was a close friend and political ally of Charles, Viscount Townshend of Raynham, leader of the House of Lords. They dominated Whig party politics but later fell out.
Lady Townshend was a favourite sitter of Jervas, being painted on several occasions. As well as painting portraits of several members of the Townshend family, Jervas restored and reworked earlier portraits at Raynham Hall, Norfolk.

Dorothy had been Lord Townshend's first love but her father was the young man's guardian and forbade the match; in was not until the death of Townshend's first wife that they married in 1713.
The union produced three children.
In the meantime Dorothy had become involved with the profligate Lord Wharton. When Townshend discovered this after their marriage he confined Dorothy to her rooms at Raynham Hall, where she died of smallpox although there were rumours of more sinister causes of death.

Lady Townshend's ghost, known as 'The Brown Lady' (because of the colour of her gown) is said to haunt the oak staircase of the hall and photographs purporting to be of the phantom are are among the most famous depictions of ghosts.
(Image 4 shows Raynham Hall)
(Image 5 is one of the photographs taken in 1934 of the Brown Lady.)

Jervas gave painting lessons to Pope at his house in Cleveland Court, St James's, which Pope mentions in his poem, To Belinda on the Rape of the Lock, written 1713, published 1717 in 'Poems on Several Occasions'.
With his growing reputation, Jervas succeeded Kneller as Principal Portrait Painter to King George I in 1723, and continued to live in London until his death in 1739.