Portrait of a Lady 1631, by Jan van Ravesteyn 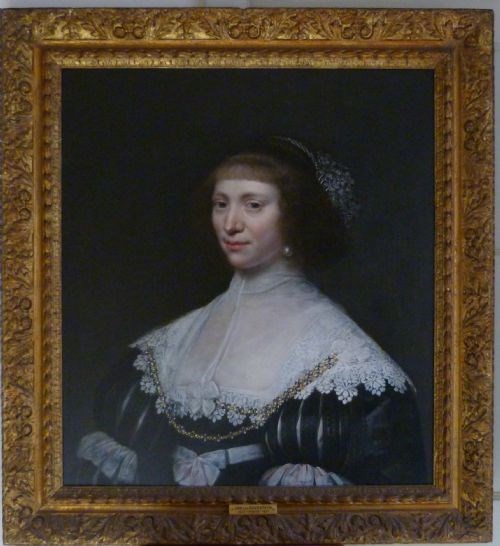 A superb portrait of a gently smiling young woman; she wears a pearl necklace, the essential accessory of the period, but modestly conceals it beneath her fine muslin. No such modesty however, for the magnificent jewellery she wears across her bosom.
Her black clothing, fashionably slashed, is of the finest quality, beautifully decorated and contrasting with the exquisite white lace spread across her shoulders. In the work of great portraitists black is never dull, its pictorial potential is fully utilised.
Black is an ideal background against which gold can stand out to dramatic effect and to contrast with the crisp white linen and lace. This extreme opposition between black and white is both austere and exciting, and is a characteristic feature of the 17th century Dutch portrait.

The theory has been put forward that the sitter is Amalia van Solms, wife of the Dutch Stadtholder (and grandmother of England's William III), who was painted many times by many different artists.
However, we consider this unlikely, as does Fred Meijer, curator at RKD, Netherlands Institute for Art History, at The Hague. 'While it is totally conceivable that Amalia van Solms sat for van Ravesteyn, I do not see any striking resemblance. Otherwise this appears to be a fully characteristic work by the artist.'

Regardless of the identity of the sitter this is a superb and sensitive portrait by a famous artist from the Netherland's Golden Age of painting.


JAN ANTHONISZ. VAN RAVESTEYN
(c. 1572-1657) was one of the most important and successful Northern Netherlandish portrait painters of the first half of the seventeenth century, and the leading portraitist of the government centre, The Hague. He was working there for the Stadholder's Court, for local patricians and for the upper classes of other cities in the Southern part of Holland and in Zeeland.
His sitters are often depicted with rich costumes in the latest fashion, intentionally alluding to their wealth and status.
His earliest signed work is the well-known tondo portrait of the young Hugo Grotius, dated 1599 (Fondation Custodia, Paris).
As early as 1604 Karel van Mander mentioned the artist as one of the most competent portraitists of his time. A large number of signed and dated works from the next decades - especially from the year 1611 - are known, including several group portraits of the Hague civic guard.
The last dated portraits are from 1641, leading to the conclusion that the painter produced little, if anything, in the last fifteen years of his life. The general style of his work is closely related to that of the Delft portraitist Michiel Jansz. van Mierevelt (1567-1641), but is generally less dry and often more flattering than the latter’s.