Portrait of a Gentleman c.1695; Circle of Nicolas de Largilliere. 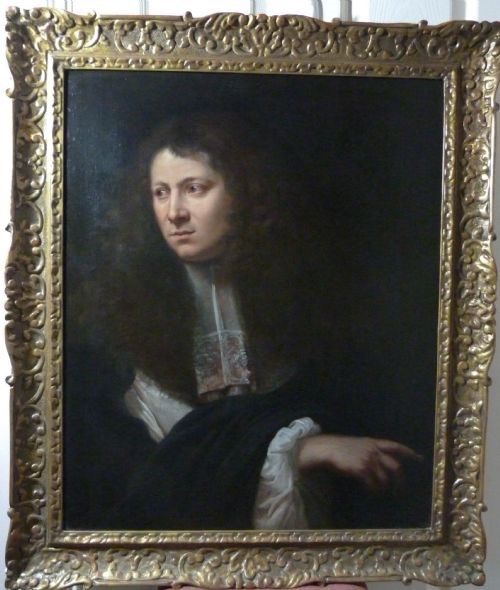 Oil on canvas in reproduction frame.
A beautiful and sensitive portrait, expertly painted, of a handsome young man. The pose suggests movement...the head turned as if to speak to a companion, whilst the hand points elegantly to the side.
The hand, notoriously difficult for lesser artists, is superbly depicted.

NICOLAS DE LARGILLIERE (1656 – 1746).
Largillière's father, a merchant, took him to Antwerp at the age of three. As a boy, he spent nearly two years in London. Sometime after his return to Antwerp, a failed attempt at business led him to the studio of Goubeau. However, Largillière left at the age of eighteen and went to England, where he was befriended and employed by Sir Peter Lely for four years at Windsor, Berkshire.

His painting caught the attention of Charles II, who wished to retain Largillière in his service, but the controversy aroused by the Rye House Plot against Roman Catholics alarmed Largillière, who left for Paris, where he was well received by the public as a painter.

Upon ascending to the throne in 1685, James II requested Largillière to return to England. James II offered Largillière the office of Keeper of the Royal Collections, but he declined due to his continuing unease about Rye House Plot. However, during a short stay in London, he painted portraits of the King, the Queen Mary of Modena, and the Prince of Wales James Francis Edward Stuart.
In Paris, during the year 1686, Largillière produced a portrait of the painter Charles Le Brun for admittance to the French Academy. The portrait shows Le Brun, then the chairman of the academy, at work on an entombment, surrounded by classical busts and figurines scattered upon the floor and table within the picture. Le Brun, impressed by Largillière's portrait, accepted him to the Academy. In 1690, Largillière was documented by the French Academy.
Largillière was appointed as Chancellor of the French Academy in 1743. He died on the 20th March, 1746.