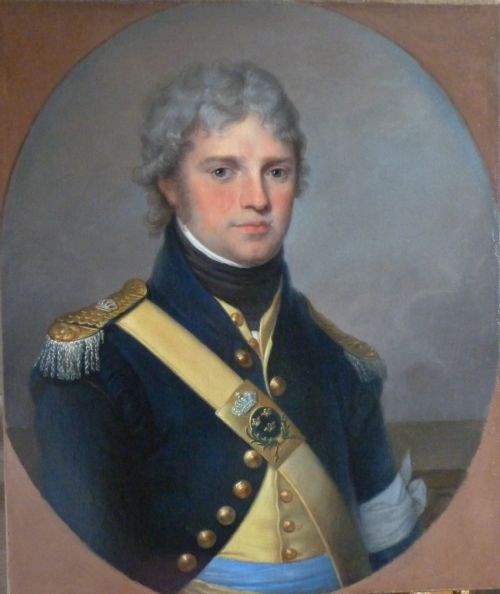 COLONEL COUNT CLAES PIPER (1770-1850) was the eldest son of Count Carl Gustaf Piper (1737-1803) and owner of the Scanian estates - Christinehof, Andarum, Torup, Hogestad, Baldringe and Krageholm.
The highlight of his military career was being awarded the title of one of the Kingdom Men, a rank issued by King Gustav III of Sweden after the 1772 coup in which he seized power from the government in a coup d'état, ending the Age of Liberty and venturing into a campaign to restore royal autocracy.

This portrait is after the prime version from 1800, which depicts the then 30 year old Piper in the 1794 model of the Livdrabantkarens (King's Life Guards) uniform, with the white mitre box on the left arm, which was in use until 1809.

The daughter of Johann Joseph Kauffmann, a painter, Angelica was a precocious child and a talented musician and painter by her 12th year. Her early paintings were influenced by the French Rococo works of Henri Gravelot and François Boucher. In 1754 and 1763 she visited Italy, and while in Rome she was influenced by the Neoclassicism of Anton Raphael Mengs.
In England she was well received and was particularly favoured by the royal family. Sir Joshua Reynolds became a close friend, and most of the numerous portraits and self-portraits done in her English period were influenced by his style of portrait painting.
Her name is found among the signatories to the petition for the establishment of the Royal Academy, and in its first catalogue of 1769 she is listed as a member. She was one of only two women founding members.