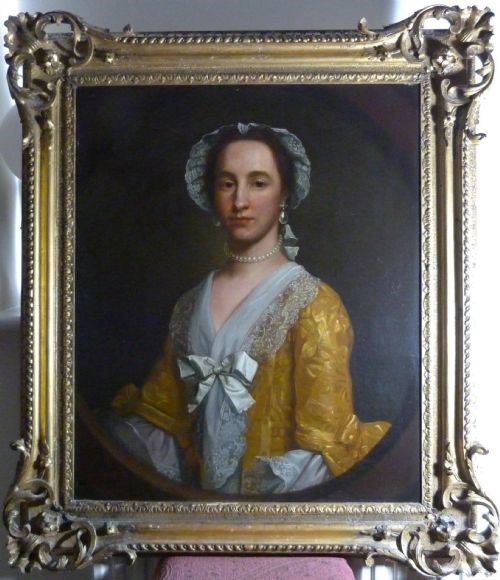 Oil on canvas in the original fine quality carved and giltwood frame.
The sitter is painted within a feigned oval bearing the inscription 'Johanna Warner Uxor/Nata 1706' (Johanna Warner, Married, born 1706) and signed 'F.M. Newton Pinx./1753' (F.M. Newton painted this in 1753).
Johanna was the wife of Robert Warner of Bedhampton, Hampshire; she was born in 1706.
A portrait of Johanna and her daughter Kitty was painted by Joseph Highmore in 1736 (See Image 9) and is at Mottisfont Abbey in Hampshire. The connection is that Kitty married a Jervoise Clarke Jervoise and in the 20th century Michael Jervoise-Ckarke bequeathed this and other family portraits to the National Trust. Kitty died in 1772.

FRANCIS MILNER NEWTON RA (London 1720 – 14 August 1794 London) was an English portrait painter and first Secretary of the Royal Academy.
He became a pupil of Marcus Tuscher, a German artist living in England, and was also a student at Hogarth's St Martin's Lane Academy.

In 1768 a group of artists formed themselves into a new society, and by obtaining the patronage of King George III, brought about the foundation of the Royal Academy of Arts, under the presidency of Sir Joshua Reynolds. Newton was elected their first Secretary, a post he held until his resignation in 1788.
He exhibited eight portraits at the academy between 1769 and 1774. His address is given in the catalogues as Mortimer Street in the first year, and Portland Street after that date.

Newton lived at Hammersmith in West London for some years, until inheriting Barton Grange, a property at Corfe belonging to his mother's family, where he lived for the rest of his life. He died there on 14 August 1794, and was buried at Corfe. He left one child, Josepha Sophia.