Portrait of Princess Mary of York as Diana, Goddess of the Hunt, after Sir Peter Lely. 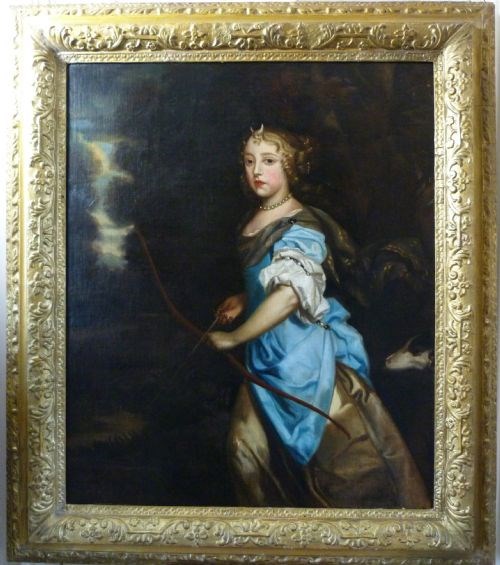 This lovely portrait is a period copy of the original painted by Sir Peter Lely. There is also a copy in Lytes Cary Manor, Somerset.

Princess Mary, later Queen Mary, is depicted as Diana the Huntress, goddess of the hunt, moon and birthing.
The celestial character of Diana is reflected in her connection with light, inaccessibility, purity and virginity; all desirable attributes for a girl who was on the marriage market.
Artists often depicted Diana wearing a classic tunic & sandals. Some painted her holding a hunting spear or a hunting horn with a bow & a quiver on her shoulder. Many Dianas were accompanied by deer or hunting dogs. Like Venus, she was portrayed as beautiful & youthful. Early artists sometimes depicted Diana wearing a crescent moon as a hair decoration & sometimes wearing an animal-skin wrap...in this case the princess wears costly silks and satins decorated with pearls.

PRINCESS MARY OF YORK, later QUEEN MARY II (1662-1794).
The eldest daughter of James, Duke of York, later James II, and Anne Hyde. Mary married the Dutch prince William of Orange at Whitehall in 1677, and returned with him to The Netherlands. In the dilemma of the 1688 Revolution she supported her husband and Protestantism rather than her Catholic father, and was invited to return to England in 1689 to share the monarchy with William. She proved a wise and effective ruler, especially during William's absences at war, and her many charitable schemes included the William and Mary Missionary College, Williamsburg, Virginia.