Portrait of a Young Boy c.1690; Circle of Charles D'Agar. 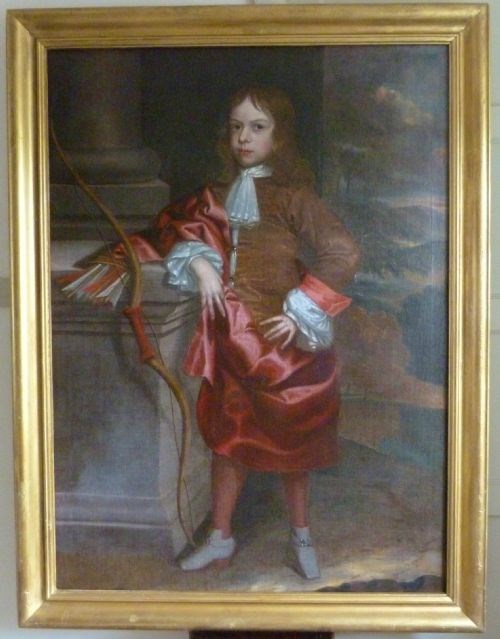 Oil on canvas in a 19th century frame.

A charming portrait of a young aristocratic boy with his bow and a quiver of arrows.
He is depicted standing next to a column which is not just a fashionable conceit of the artist but also signifies that this boy is to be the pillar of his house, i.e. this is the heir of a noble family.

Early recreational archery societies included the Finsbury Archers and the Kilwinning Papingo, established in 1688. The latter held competitions in which the archers had to dislodge a wooden parrot from the top of an abbey tower. The Company of Scottish Archers was formed in 1676 and is one of the oldest sporting bodies in the world.

CHARLES D'AGAR (1669 - 1723) came to England with his Huguenot father Jacques in 1681, settling here permanently after a stay in Copenhagen by 1691. He had a good practice, numbering such people as the Duke of Buccleuch and Lord Bolingbroke among his patrons.

D'Agar painted very much in the style of Michael Dahl, whose portraits of children are very similar, especially in the treatment of the hair, and they often employ the same staging device, whereby the sitter is placed on a terrace, a landscape beyond.