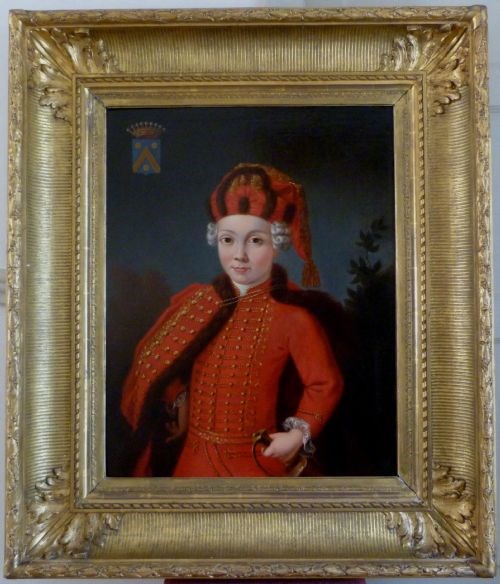 Oil on canvas in a neo-classical giltwood frame.

The young sitter wears a hussar uniform, his coat of arms displayed to the left with the coronet of a marquis or count above the shield.

This ancient family, motto "Honore et Virtute", were from the Champagne-Ardenne; their home in the 18th century was the Chateau de Droupt-Saint-Basle.
At the time of the French Revolution in 1789, some 20 years after this portrait was painted, Marquis Charles-Etienne de Chavaudon de Sainte Maure was forced to flee as an emigre...his parents were arrested and held in the chateau then at Troyes. Whether the sitter is Charles-Etienne is not known, but it seems probable.

In later years the family regained most of their property.
The last of the line, the final Marquis de Guillaume de Chavaudon de Sainte Maure, died without an heir and the contents of the chateau were sold in 1974.
The chateau remained empty from 1974 to 1983 and its demolition seemed likely.
Fortunately it was bought and restored over a 23 year period by the present owners, the Paupe family. (see Image 9).

ALEXANDER ROSLIN (1718 – 1793) was a Swedish portrait painter.
In 1759 he married Marie-Suzanne Giroust and plied his trade in Stockholm, Bayreuth, Vienna, Paris and Italy. From 1750, he worked mainly in Paris.
A number of portraits of Russian Imperial statesmen have been attributed to Roslin, including portraits of Ivan Betskoi and Ivan Shuvalov. He also painted some notable portraits of Polish and French aristocrats.
The vast majority of his paintings are of the aristocrats and nobility of Europe.
He died in Paris on July 5, 1793.