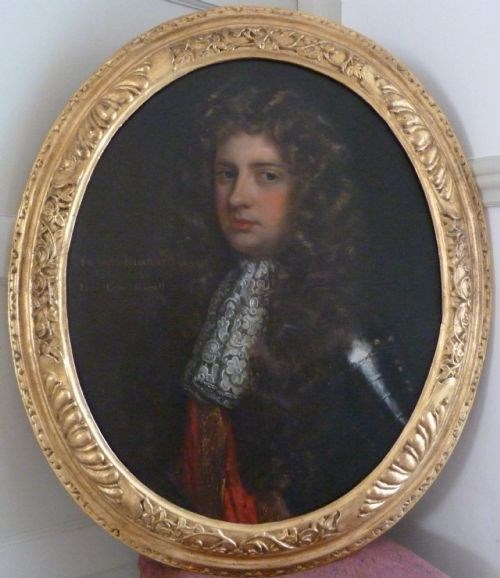 Oil on canvas in carved and giltwood period frame, bears the inscription "Francis Russell, Son of the Hon. Edwd Russell".
The sitter wears a fashionable and costly wig and an even more expensive cravat of Venetian 'gros-point' lace. In 1685 Charles II ordered three cravats of such lace at a total cost of £94....equivalent to over £16000 today!

JOHN RILEY, or Ryley, (1646– March 1691) was an English portrait painter. He painted portraits of Charles II and James II, and was Court Painter to William III and Mary II. One of his pupils was Jonathan Richardson.
Riley was born in London, one of the sons of William Riley or Ryley, Lancaster herald and keeper of the records in the Tower of London, who was created Norroy king-at-arms under the Commonwealth, but reverted to his herald's office at the Restoration.

Riley studied painting under Isaac Fuller and Gerard Soest, and from the latter learnt a forcible, straightforward style of portraiture which rendered his portraits noteworthy.
Riley did not attain much eminence until the death of Sir Peter Lely, when courtier and royal official Thomas Chiffinch sat for him, and was so much pleased with his portrait that he showed it to the king. Charles II gave Riley some commissions, and eventually himself sat for him. During one sitting he is said to have remarked to Riley, "Is this like me? Then oddsfish I'm an ugly fellow". Riley also painted James II and his queen, and, on the accession of William and Mary, he was appointed Court Painter.

Riley was said to be a quiet, modest man, very diffident of his own art, but his portraits are truthful and lifelike. With more self-confidence he might have attained to the position of Lely or Kneller. He was assisted in painting his draperies and accessories by John Closterman, who finished several of Riley's pictures after his death.

Riley, who suffered very much from gout, died in March 1691, and was buried in the church of St. Botolph, Bishopsgate.

SIZE: 31 x 26 inches inc. frame.
PROVENANCE: Collection of a Titled Family, Yorkshire Dales. (The same collection as the Portrait of a Lady by Thomas Murray also on this website, also the portrait of Henrietta Maria).
Verso: old inventory number '58'.