Portrait of a Gentleman c.1680 by Mary Beale 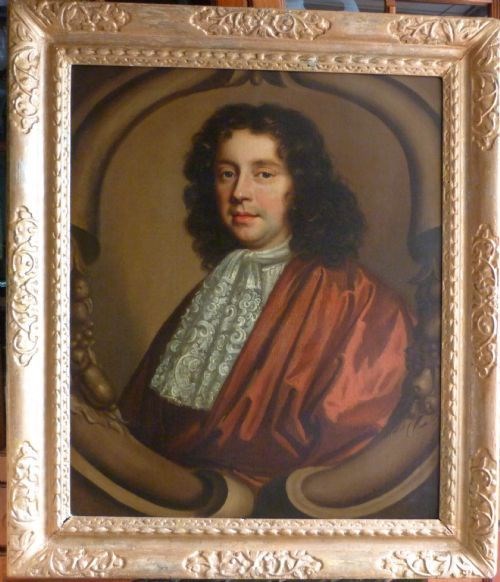 Oil on canvas in 17th century frame.
This is a fine quality portrait painted with great sensitivity and insight. The sitter wears an expensive lace cravat and an Indian silk tea gown, highly fashionable, and so costly that Samuel Pepys had to hire one when his portrait was painted by Hayls.
The sitter is depicted within a beautifully painted feigned stone oval, bearing fruit. This motif was used so often by Beale as to be almost her trademark. It also was intended to be a Classical reminder.
Beale excelled in formats where an extra degree of sensitivity was required, and it is noticeable that many of her portraits, as in this example, a slight smile can be detected...there is a freshness and an immediacy that Beale's contemporaries were seldom able to achieve.

MARY BEALE (1632-1697) was born in Barrow, Suffolk, the daughter of John Cradock, a Puritan rector. Her mother, Dorothy, died when she was 10. Her father was an amateur painter, and member of the Painter-Stainers' Company, and she was acquainted with local artists, such as Nathaniel Thach, Matthew Snelling, Robert Walker and Peter Lely. In 1652, at the age of 18, she married Charles Beale, a cloth merchant from London - also an amateur painter.
She became a semi-professional portrait painter in the 1650s and 1660s, working from her home, first in Covent Garden and later in Fleet Street.
The family moved to a farmhouse in Allbrook, Hampshire in 1665 due to financial difficulties, her husband having lost his position as a patent clerk, and also due to the Great Plague of London. For the next five years, a 17th-century two storey timber-framed building was her family home and studio.
She returned to London in 1670, where she established a studio in Pall Mall, with her husband working as her assistant, mixing her paints and keeping her accounts. She became successful, and her circle of friends included Thomas Flatman, poet Samuel Woodford, Archbishop of Canterbury John Tillotson, and Bishops Edward Stillingfleet and Gilbert Burnet.
She became reacquainted with Sir Peter Lely, now Court Artist to Charles II. Her later work is heavily influenced by Lely, being mainly small portraits.
Mary Beale died in 1699 in Pall Mall, and was buried at St. James's, Piccadilly in London. Her husband died in 1705.

Beale was also a talented and intelligent writer, completing her ‘Discourse on Friendship’ [British Library] in 1667, in which she discusses friendship. Mary and her husband believed strongly in equality between man and wife, as shown by Mary’s ‘Essay on Friendship’. Without such equality, Mary believed, true friendship could not exist; ‘This being the perfection of friendship that it supposes its professors equall, laying aside all distance, & so leveling the ground, that neither hath therein the advantage of other.’